Blockchain – A Primer: Everything You Need to Know

A Blockchain at its most basic is a series of blocks that contain information. This technology is intended to timestamp digital documents to prevent backdating or tampering. The purpose of Blockchain is to solve the double-recording problem without requiring a central server so it runs on a system recording information that making it difficult or impossible to change, hack or cheat.

Blockchain is made up of a digital ledger of activities that are replicated and spread across a network of computer systems on the Blockchain. It is a new model for information sharing and coordination and designed for a connected global future.

Blockchain is used to securely transfer items such as money, property, and contracts without the need for third-party intermediaries such as banks and governments. Once the data is registered inside the Blockchain, it is too complex to change it.

Blockchain is a protocol of software (like SMTP of email). However, a blockchain cannot be run without the Internet. It is also named meta-technology because it influences other technologies. The Blockchain comprises several parts, including databases, software applications, and several connected computers.

Blockchain technology has become the new favorite of the 21st century. But long before this technology came into existence, there was a system called the digital cash that David Chaum envisioned in 1983 to deal with the concept of double-spending (the risk that a digital currency can be spent twice). Even at that time, advanced cryptography existed, but it was not compatible with centralization, did not offer the the anonymity of transactions, or mitigate the risks of double-spending.

Why is Blockchain Important?

All businesses run on information—the faster and more accurate the information, the better. Blockchain is ideal for providing information as it provides immediacy, share-ability, and complete transparency of that information stored in an immutable ledger that only authorized network members can access. Blockchain networks can track a variety of information, including orders, payments, accounts, and production. Administrators also share a single view so that you can see all the details of the deal to the end, increasing reliability, new efficiencies, and opportunities. 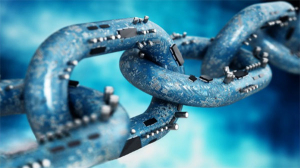 Blockchain security relies on two aspects: the structure of the block and the peer-to-peer network that maintains it.

Blockchain is a technology that promotes Bitcoin, but the version of the blockchain decentralized ledger system on the market is not only Bitcoin. Several cryptocurrencies have their Blockchain and distributed ledger architecture.

How to invest in blockchain technology?

Now, in this tutorial for blockchain beginners, you will learn about the limitations of blockchain technology.

What are the business benefits of Blockchain?

The main benefit of Blockchain is its ability to act as a database for recording transactions, but its benefits go far beyond traditional databases. Most noteworthy is to eliminate the possibility of tampering by malicious actors and provide the following business benefits:

Blockchain has a short history.

It’s only been a decade since blockchain technology emerged, but companies are exploring new ways to apply it to their business. As the amount of digital data used in our lives increases, the need for security, access, transparency, and integrity of the data Blockchain provides is growing.

IN NOVEMBER, Cryptocurrency IOTA stated a beta variant of Data Marketplace, explaining that Blockchain can be applied as a marketplace to deal or trade unused data. Since most of the company’s data is not being used, Blockchain can act as an intermediary to store and move this data and improve many industries. IOTA is still in its infancy, but it has more than 35 well-known companies (including Microsoft) and provides feedback.

Blockchain Council offers a certification for Blockchain, specifically designed for those who want to make a career in the Blockchain domain. This certification requires a deep knowledge of the core concepts of Blockchain. It focuses on Corda, intelligent contracts, Hyperledger, and Quorum applications.

Blockchain Council certification helps you work in industries such as digital marketing, healthcare, and supply chain. The training and certification provided by the organization are helpful in a variety of companies, businesses, and developers. It will be using blockchain technology in the business of a centralized and traditional working system.

As Blockchain is an emerging technology, the predictions about its potential are still mixed.

Each block of the chain holds many businesses, and every moment a new transaction happens on the Blockchain, a history of that transaction is added to the ledger of all participants. A distributed database managed by multiple participants is called Distributed Ledger Technology (DLT). Blockchain provides a way for people worldwide to maintain a database together without relying on a central authority.

According to a survey by TechRepublic Research, 70% of the respondents said they have never used Blockchain. However, 64% said they expect Blockchain to impact their industry, and most are predicting positive results. Cybersecurity is one of the most promising areas where blockchain technology is expected to grow. Data tampering is a constant challenge for organizations of all sizes. Blockchain technology can prevent tampering by keeping data safe and allowing participants to verify the authenticity of files.

This is Kenn Leuzinger. Thank you for taking the time to read my blog post. Please contact me if you want to have more of a discussion on this topic.

About the Author: Kenn Leuzinger